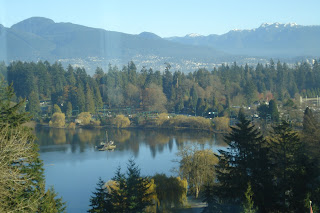 Yesterday my friends and I were treated to a piano recital performed by my friend Patrick who has been visiting from Germany. This is the third time he's performed for the members of my Memoir writing group, the second real 'formal' recital, held at the luxury condo building in the West end where my friend B. lives. Above is the view from B's 11th floor window looking out over Lost Lagoon in Stanley Park. What a fabulous place to spend a pleasant Thursday morning! 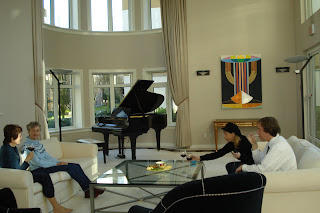 The building has a luxurious lounge, which B. says is never used. Here's the little group of us relaxing before the recital begins. It's a perfect place to hold such an event with good acoustics and, as you can see, very beautiful surroundings. Posh! B. provided wine and nibblies which made it even more special while we sat back on the comfy couches and listened to Patrick play. 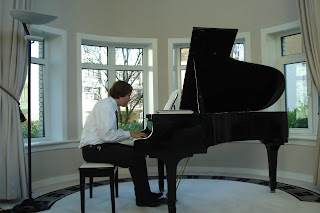 Patrick played a half hour selections of Baroque music including Bach. He's an accomplished pianist but his real passion and skill is as an organist. He plays the pipe organ at a church in Germany where he lives. We feel really privileged to have him perform for us. A real treat!

Posted by Wynn Bexton at 9:41 AM No comments: 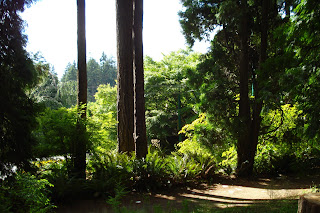 My city, Vancouver's famous Stanley Park is 400 hectares (1,000 acres) of primordial forest located within the city in the West End area, a short walk from downtown. The peninsula that was purchased and turned into parkland dates back to 1886 so the Park is very much part of this city's history. Few other urban areas can claim this exceptional "Fresh-from-the woods" quality that Vancouver has. Stanley Park is a wilderness area set in the heart of a metropolis. The park is surrounded by the waters of English Bay and Burrard Inlet and a sea-wall walk extends right around the circumfrence of the Park which is a favorite for afternoon strollers, bikers, in-line skaters and joggers. Near the Park's entrance is a monument to Lord Stanley, a former Canadian Governor General, after whom the park was named. There are roads through the Park which lead around the Park or to the Lions Gate Bridge across the Inlet to the North Shore.
A causeway leads to deadman's Island, a former Indian burial ground. Brockton Point takes its name from the chief engineer of the HMS Plumper, the first ship to first survey this area in 1859. (See my travel blog about The Admiral's Island: Keats Island @ http://travelthroughhistory.blogspot.com ) 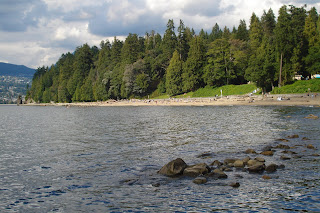 There are several good beaches where you can sun-tan or swim in summer, and at Second Beach there is an outdoor pool (my favorite place to swim.) As well there are cricket fields at the Brockton Oval Sports Field; an Aquarium; flower and rose gardens which are glorious in summer; an outdoor Theatre Under the Stars where you can watch musicals performed in summer; playgrounds, a water park at Lumberman's Arch; and various concessions, tea-rooms and restaurants.

The Park is rich in history. Lumberman's Arch was originally the site of a Salish Village. Portugese and Scottish ship jumpers later integrated with the Native women and a village was formed at Brockton Point. The poet Pauline Johnson used to paddle her canoe in the Lagoon, which she named Lost Lagoon because when the tide was out, the water receded. There's a monument to her at Third Beach.
The painter Emily Carr used to paint in the Park and held painting classes there for a time. Prospect Point was the site of an early semaphore station which failed to prevent BC's first steamship, the SS Beaver from capsizing on the nearby rocks back in 1888. Trails leaved through the trees to Siwash Rock which Indian legend holds was once a young man who was turned to stone as a 'reward' for his unselfishness. The Hollow Tree is one of the park's most famous landmarks, an immense red cedar tree that was already hollowed out when the first Europeans arrived more than a century ago. At Brockton Point there is a disply of totem poles respresenting various coastal Indian tribes.

So it was with great sadness that we witness the destruction of much of our beloved Park last winter in a hurricane-force wind storm that took down 10,000 trees -- many of which were old-growth trees centuries old, unreplaceable. In addition the damage to the sea wall was so severe that parts of the park promenade have been closed up until just a couple of weeks ago. Walking through to observe the destruction left everyone teary-eyed and speechless. How could one force of nature destroy another that was so beautiful and treasured?

Imagine how just two days ago when another fierce wind storm swept across the city that we were all so terrified that more of the Park would be destroyed. Fortunately, it wasn't nearly as strong a storm as the one last winter, though the weather-men warn that there could be more to come like it. We can only pray that our park will be safe from further harm. 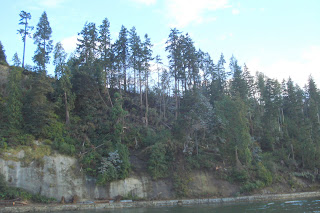 Wind damage along the west end of the park and sea-wall.
Where you see the bare spaces, was one towering cedars and fir trees,
now all destroyed and gone forever.

Posted by Wynn Bexton at 4:44 PM No comments: 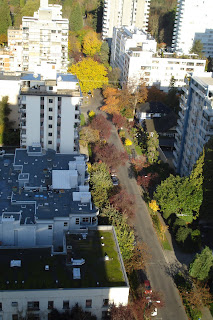 View from a friend's apartment
Autumn in the West End


"I saw old Autumn in the misty morn
Stand shadowless like silence, listening
To silence 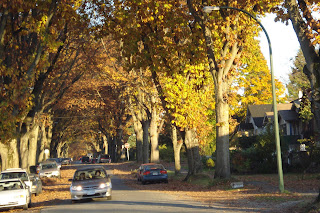 In the neighborhood where I live the streets are lined with trees and at this time of year it's very colorful. I love walking through fallen leaves. It reminds me of my childhoods in Ontario when we used to build forts and pretend houses and rake the leaves into big piles, then jump in them.

These are the colors of Autumn: red, brown, yellow, ocher, orange, purple. I enjoyed walking around the city taking photos of the autumn colors. But very soon the trees will be bare. Winter is creeping up very quickly. I'm thinking of that song When Autumn Leaves Start to Fall...There's something very melancholy about that song, but it's beautiful just the same. 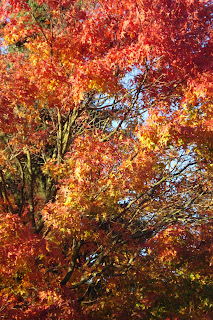 Posted by Wynn Bexton at 3:53 PM No comments: