This is one of my "Confessions of a Black Sheep" memoirs and I decided to post it tonight for a very specail reason...


MOONDANCING
“We were born before the wind
Also younger than the sun
Ere the bonnie boat was won as we sailed into the mystic...”

We’re lounging on a heap of cushions in the middle of the floor at Fat Freddy’s house, passing a pipe of good black hash that came stamped with a gold seal from Pakistan. Van Morrison’s soulful voice comes over the audio...

“I want to rock your gypsy soul
Just like way back in the day of old
And together we will float into the mystic...”

My mind drifts in the slip-stream, those melodies, that voice as sweet as Tupelo honey. It is a safe and comfortable feeling being with my gathering of friends in Fat Freddy’s Tenth Avenue house.

“And the caravan has all my friends
It will stay with me until the end
Gypsy Robin, Sweet Emma Rose
Tell me everything I need to know...”

I was born with a gypsy soul, so it’s no surprise I ended up with a motley crew like these The guys all had names to identify them: Fat Freddy, Dirty Dan, Supersonic Joe, Mad John, Lofty. Half of them were on the lam from the States, deserters or draft dodgers trying to protest and escape the war in Viet Nam, a cool gang of long-haired hippy dudes.  We were their long-skirted gypsy women. We were family.

“Well, it’s a marvelous night for a Moondance
With the stars up above in your eyes
A fantabulous night to make romance
‘Neath the cover of October skies..”

I was living with Dirty Dan and my two kids and an assortment of other gypsy souls back then. It had been a long and interesting journey from the straight suburban life in Northern Alberta to the hippie houses of Vancouver. But it wasn’t surprising that I ended up there.

“I can hear her heart beat for a thousand miles
And the heavens open every time she smiles
And when I come to her that’s where I belong
Yet I’m running to her like a river’s song
She gave me love, love, love, love, crazy love...”

I was born a rebel.  My adventurous spirit began when I was a toddler, gave my parents grey hairs at an early age. Growing up, I always felt I was singing a different tune, dancing to a different beat. In school the teachers despaired of me, said I was a ‘dreamer’. I often chose friends who were the ‘outcasts’ -- kids who were different and unpopular. Maybe I gravitated toward them because they were out of the ordinary, ‘different’, like me. It’s no surprise then, when I got out of high school and started working at the newspaper, that I discovered another bunch of rebels, the Beat Generation. Jack Kerouac became my hero, along with Alan Ginsberg and all the Beat poets.  I read everything Kerouac wrote. I wanted to write like him, be hip, travel on the road with him. I wore black and hung out in smoky coffee houses, listened to jazz and bongo drums. I developed a taste for dry red wine, went to art school, wrote haiku and read Existentialist writings. I even took the bus to California a few times. These events began to shape and change my life.
Unfortunately the constrictions of marriage and raising a family deterred me from following my Beatnik dreams.  Seven years in a northern suburbia raising my kids and dealing with my husband’s downward spiral with alcoholism isolated me from a world I longed to be part of.

Then, a trip to New York changed my life. I went to visit a friend who lived in Greenwich Village, a place I’d only dreamed of until then. I prowled the Village, the bistros and coffee houses that were the haunts of my heroes. The Beat Generation had been replaced by a new generation of rebels, the Flower Children. All the talk in the Village was about Woodstock. I was introduced to a different kind of music, turned on to marijuana and hashish and the kind of free-spirited life-style that I’d always longed to live.
“And it stoned me to my soul
Stoned me just like Jelly Roll
And it stoned me…”

Dan, and his friends, gave me love at a time when I had needed it most. I had met him the year we moved back to the Coast.  He was a big, solid, gentle guy, a deserter from the American army, one of the group of deserters and draft dodgers who had taken shelter here in Canada and were hiding out from the immigration. They called him “Dirty Dan” because he was a wanna-be biker dude who had grown his hair long and joined the band of gypsy souls who hung out on Fourth Avenue.


Those were crazy days, but they were good days. I remember riding in the car with Dan and my kids, singing to the radio:
“On the way back home we sang a song
But our throats were getting dry
Then we saw the man from across the road
With the sunshine in his eyes…”

There was always music: The Doors, Janice Joplin, The Rolling Stones, T-Rex, Led Zeppelin, the Moody Blues and Van Morrison.


“And all the night’s magic seems to whisper and hush
And all the soft moonlight seems to shine in your blush..”
And here we are again, in my mind’s eye, lolling on the cushions in the middle of the floor at Fat Freddy’s house, passing the pipe of good black hash, listening to that sweet lilting voice of Van Morrison resound from the speakers, cranked up to full volume, sweeping us away into the mystic…


*** In memory of Dan who I learned is dying (or perhaps already gone) from cancer.
We lived wild in those days during the '70's.  I loved him once, but he chose a life of drugs and I had to say goodbye to him to protect myself and my children.  Now he's gone, cancer and apparantly a long addiciton to crack cocaine.  Karma?  Perhaps, but still, I wanted to remember him and the parts of our time together that were free and fun.

MEMORIES OF NEW YEARS EVES PAST 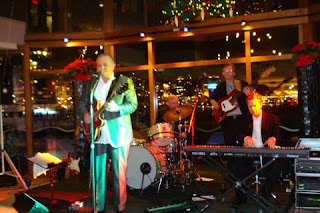 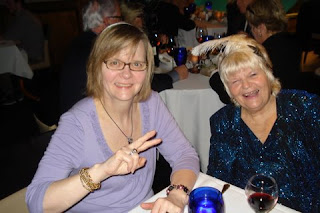 Cheryl and me, New Years Eve 2011-2012
This is a memoir I wrote awhile back about New Years Eve.  This year, to celebrate the year 2012, I went with my friend Cheryl to the Granville Island Hotel where my son  Steve and his band, The West Coast Blues Revue was playing for their second New Years Eve in a row. We'd had such a grand time there last year that this year Cheryl and I decided to rent a room at the hotel for the night and really live it up. It was costly but great fun and we've already decided to do it again next year if Steve's band is asked to play there again.

For the last few years I've attended New Years Eve parties at the places where my son's band was playing, and in the company of good friends.  So it has become a really fun event to look forward to.

This little memoir story is about other New Years Eves in the past, some of which were not so memorable or so much fun although I always tried to make the best of it, no matter what the circumstances.


ONCE UPON A NEW YEAR’S EVE
I have both fond and melancholy memories of New Years Eves.  In the old times it was one of the most anticipated holidays next to Christmas.  You always had a new outfit to wear which was planned well in advance, something fashionable and spectacular to wear to the celebration which was often held in a night club or at a gala house party.  I’ll never forget the year I’d made a gorgeous gold pois de sois two-piece dress. I looked fantastic.  But when I arrived at the big party with several other couples, which was held in a big barn-like place on Grandview Highway, I was chagrined to find that another woman in the group was wearing a dress of similar style and material.  I was crushed, but of course I had made mine myself so considered it be  more ‘original’.  I recall one new years eve when I was in my late teens, my girlfriend and I had been invited out by two American sailors to attend a show at the Cave supper club.  My girlfriend had a new dress but hadn’t time to hem it so she’d pinned the hem up and all night long the pins scraped her legs until they were bleeding.  After the show at the Cave, we tottered over to the Holy Rosary Church for midnight mass.  I was in charge of holding the bottle of wine in a brown paper bag under my coat, and I distinctly recall dropping it in the back pew!

Yes, New Years eve was always a night of wild abandon and over-drinking.  At clubs or house parties, when it turned midnight, you are supposed to kiss your partner or date, but all to often I’d find myself alone in a crowd of strangers while my boyfriend was off in a corner kissing someone else.  I soon grew weary of these episodes.  New Years eve began to lose it’s romantic appeal, and instead it became a lonely time, especially once I was single.  Eventually I decided I’d rather stay home alone, if necessary, so I’d bring in some goodies: the makings for Welsh rarebit, oysters to fry, a few bottles of McEwan’s ale and a bottle of Heiken Trokel sparkling wine.  I’d tell a few people my plan and wait to see who’d show up, and usually a couple of close friends would drop by.  One of my most memorable New Years Eves was one I spent all alone enjoying my own company, dancing to my favourite music.

I’ve had New Years Eve’s abroad, far from family and close friends, that were still fun in their uniqueness.  One time I remember my room-mate and I heading off to a big hotel for the night and on the way stopped to get a bite to eat at a pizzaria.  We walked into a party of rowdy Quantas airlines crew who immediately embraced us and invited us to party with them.  That was one of my best times, and it landed me a nice boyfriend for several months, so long as Quantas was flying in and out of town.

Now I will occasionally make plans to go out, if friends are going along and the price is right.  Being with close friends, dancing and dining, is quite satisfying.  It’s no longer to me the ‘romantic’ exciting night it used to be, but it’s worth a little celebrating especially if it’s been a good year.