WHAT A GREAT PARTY! 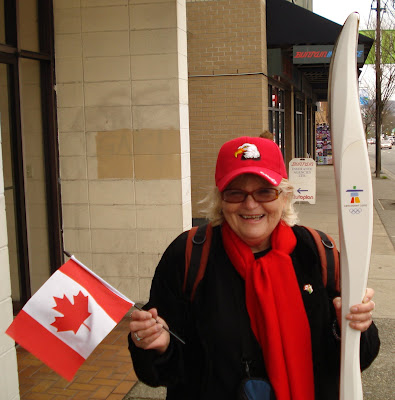 The party's over. The 2010 Winter Olympics has ended. And what a party it was! I don't remember ever seeing such a jubilant crowd of people day after day as I witnessed here. It even surpassed New Orlean's Mardis Gras.

But now it's over, what a let-down feeling. The feeling was immediate. By Monday morning, after that nail-biting golden goal hockey game between US and Canada (we won! Go Canada!) the streets flooded with thousands of people celebrating way into the night. And Monday morning on the bus, all was quiet, drab, dour. No more red and white toques, mittens, hockey jerkins. No more Canadian flags (and others) fluttering. No more happy smiling face. It was like waking from an unbelievable dream.

I lived one of my dreams during those two weeks, being the Roving Reporter for the Planet Eye Traveler, writing a couple of stories a day for their city guide and the Vancouver Guide. You can see them here
www.planeteyetraveler.com/travel/north-america/vancouver

I managed to get to most of the live free venues and was treated to a night at the medal awards and also got a media pass to an aboriginal fashion show and reception, thanks to a good friend. And although it was sometimes exhausting it was also very exciting and I am so glad I got involved. Because in the beginning I was one of the nay-sayers about the Olympics: all that tremendous expense when other things like low-cost housing for our street poor, the Arts, daycare and other things were being cut. I even planned to 'escape' with my friends to Cuba during the Games. But, as luck would have it, I had to stay behind and thus got invovled in the whole celebration. Being the Roving Reporter gave me a focus each time I went out and made it all the more fun. I even got to hold the Olympic torch on one of my excursions!

Now things have calmed down. All the visitors have left town. The atheletes too, with their medals. (We won 14 gold, the most any country has collected at the Winter Games.) There were highs and lows, tragedies and disappointments, but most o all there was this incredible spirit of patriotism. For once the Canadians were not reluctant to shout out their praise of Canada. The Games made everyone proud!

Posted by Wynn Bexton at 2:32 PM No comments: