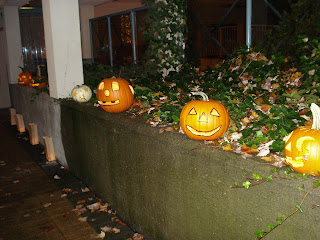 Some of the people from my building carved pumpkins and this is what the outside of our building looked like. There were lots more than that, and brown paper bag lanterns too. A bunch of us waited in the lobby with bowls full of goodies, but alas! most of the neighbourhood children were in a different area. Some of us went scouting to find them and direct them to our place. In the end we only had about 10 trick or treaters but we all had fun anyhow. 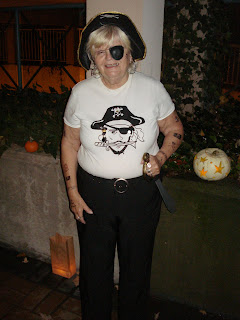 I put on my pirate clothes and after the handouts were over I headed down to the Drive to meet my friends. The streets were full of merry-makers, many of them in costumes. And fireworks were going off in the parks. At the Latin Quarter there were a lot of people in costumes and it was a real party atmosphere (more so than usual!) We had lots of fun and merriment.

Now Hallowe'en is over for another year and pretty soon it'll be Santa and the elves and Christmas decorations will go up instead of candle-lit pumpkins and spooky things. Any holiday like this is fun and brings out the kid in me.

I am hoping to write more on this site now that my other on-line diary is off the web for good. It's been a very busy time for me lately though and not much leisure time for my own writing although this weekend I've managed to catch up somewhat. Still, for the next 3 weeks I expect to be very busy and may not get time til after that.

The next 'holiday' is Remembrance Day on November 11th. 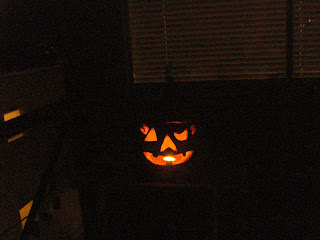 Posted by Wynn Bexton at 8:47 PM No comments: