HOW I CELEBRATED MY BIRTHDAY

Ever since I was a small child, birthdays have been special for me.  My mother always prepared special surprised and held parties for me when I was a kid and later, as a teen, she'd ask what special meal I'd liked her to cook.  I'd invite my class-mates over to do fun things like pull taffy and play games like 'spin the bottle'.  Even as an adult I've loved special birthday parties.  For some years I used to hold "Gemini Parties" and invite all the Geminis I knew (as well as other friends). One year the Geminis were told to bring their favorites cakes. There were a lot of strawberry shortcakes (my favorite), peach upside down cakes and other similar goodies.  The first year I went to live in Greece I wanted a special "Canadian" birthday.  I invited friends to meet up on Filopappou Hill.  My Gemini soul-brother Robbie (an artist from Argentina) drew maps for the invitees.  I got some wieners, buns, marshmallows and of course the bottles of wine and beer.  We couldn't light a bonfire so we cooked the wieners in a little gas cooker for our 'weiner roast'.  It was a merry crowd. Some people got lost on the way up and took time out to drink their wine. So by the time the group gathered they were really into party mode.  For a couple of years here in Vancouver I celebrated together with my friend Susan who is also a Gemini.  We often went to the Latin Quarter (now closed) for our parties.  But this year I wanted something different.  It happened to be the Powell River Blues Festival weekend so my friend Cheryl and I decided that we'd go up to celebrate.  My son Steve was organizer and host of the Festival and I knew a lot of the musicians too.  So we made our reservations for the weekend at the lovely Beach Gardens Resort where they Festival was held. 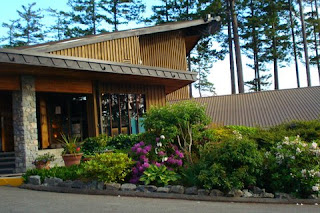 We left home early Saturday morning and drove to Horseshoe Bay to get the Sunshine Coast ferry.  It's a lovely drive up the coast and although the weather was somewhat overcast, we were hopeful that it would clear.  And it did, by the time we had traveled the long winding road up to Earls Cove to wait for the second ferry that would take us to Saltry Bay. 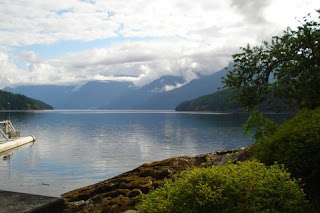 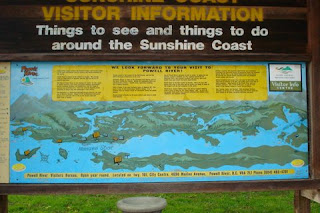 It wasn't a long wait and we enjoyed the scenery.  The sky was beginning to clear too. And pretty soon we were aboard the ferry. 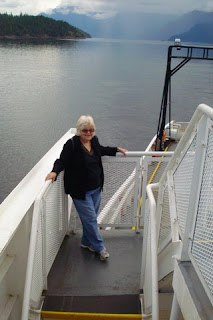 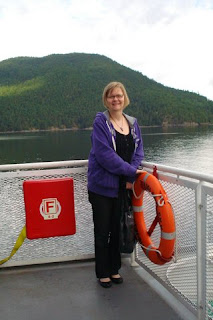 The coast of British Columbia is one of the most scenic places in the world, and even when it's overcast and a bit damp it's still an enjoyable trip.  The ferry from Earls Cove to Saltry Bay was fast, like the Horseshoe Bay ferry -- a bit less than an hour.

The drive up to Powell River is also windy but Cheryl is an excellent driver.  All along the roadside were banks of bright yellow gorse which made a pretty sight.  We finally arrived at the Beach Gardens around noon.  The receptionist had our room key ready and an envelope with our guest passes for the Festival.  And Steve and Sue were there to greet us too!  We were shown to our room (with a view of the beach). Ah! what a beautiful sight! 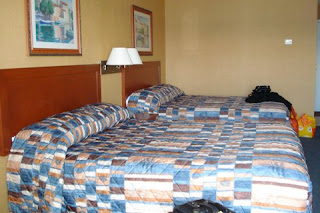 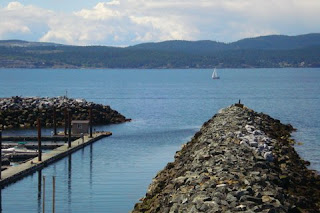 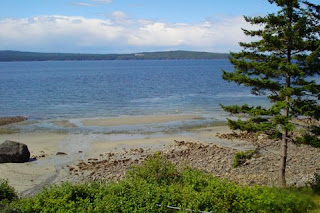 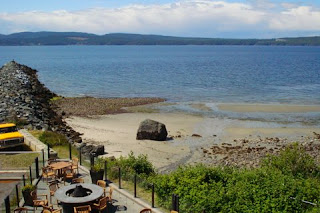 After a little rest and some lunch on the terrace, we went up to the Festival site to enjoy an afternoon for Blues and fun with friends. 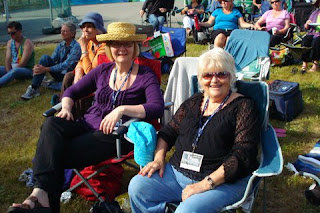 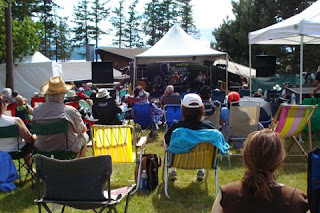 The highlight of that afternoon was the incredible show performed by singer Robin Banks, backed by my son Steve and the West Coast Blues All Stars. 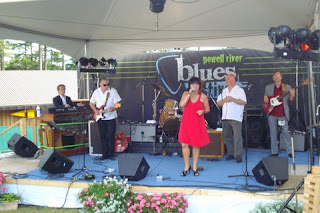 We also enjoy the other bands especially the afternoon closing act of the Strange Tones, a group from Portland Oregon that got the place rockin' with their upbeat music and go-go girl dancers.

We retired to our room for awhile (Cheryl loves watching the hockey games!) We were both pretty tired, especially Cheryl after that long drive, so she went to sleep and I went down to the dining room and had a bowl of the most delicious sea-food chowder I've ever tasted.  There was an evening jam happening, but unfortunately I felt too tired to take it in.  Needed to save myself for the next day which was my Birthday!

In the morning, we remembered it was the Queen's 60th Jubilee so we turned on the TV to watch and managed to see the flotilla up the Thames.  So there I was early on my birthday morning, sitting in bed sipping pink bubbly while watching the Queen! 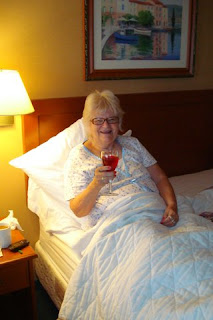 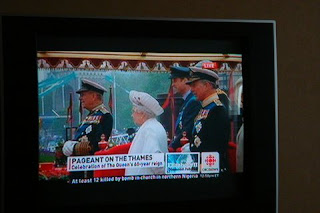 Chilean pink bubbly was definitely the drink of the day! And that's how the birthday celebration began. 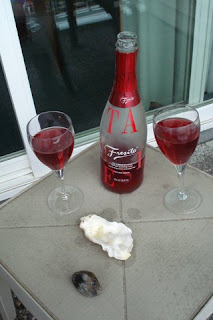 It was raining that morning so Cheryl and I decided to take a little tour of the old town of Powell River. (I'll post a special blog about that later).  We had a great morning exploring and had brunch in one of the towns oldest hotels, then set off to explore. Of course Cheryl wanted to visit the local brewery and we even got to do a wine tasting.  Then we did some photos of heritage buildings and set off to take a look at the old hulls anchored off shore where divers practice.  While we were down on the beach we spotted a bald eagle up on the cable wires and lots of interesting things on the beach such as a jelly fish and star fish. Then on the way back we saw a deer run across the road in front of the car.  We headed back to the Beach Gardens in time for the afternoon show. And the sun came out just in time too! 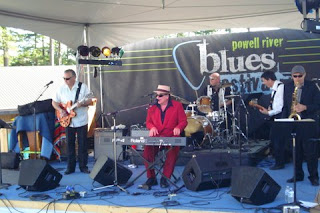 Steve and his group were backing up Mitch Wood (on keyboards) and his Rocket 88s.  A great band.  At one point Mitch made an announcement that there was a special guest celebrating her birthday. Me! And they sang happy birthday to me. That rounded off the program for the weekend and a very successful Festival and made it an extra special day for me.

Now it was time for the birthday dinner.  I ordered a cup of that delicious seafood chowder along with linguine with scallops and prawns. Yummy! 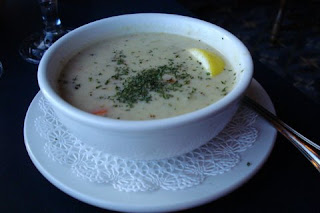 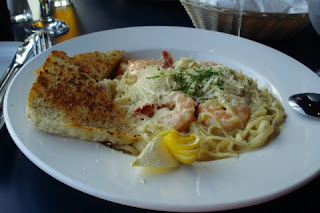 We also had Cajun oysters for appetizers. 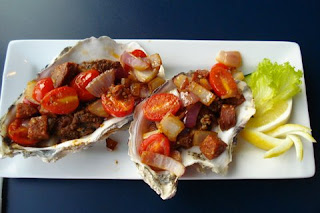 The whole gang of musicians was there too so it was a nice party. It was a surprise when the waitress brought in a little chocolate birthday cake with a candle and sparkler. And again everyone sang Happy Birthday to me. 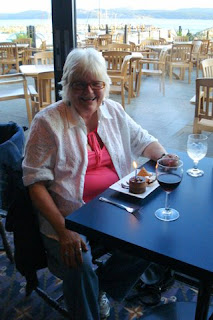 After dinner we went to the special party that was thrown for the volunteers and enjoyed an evening of more music at the jam in the PowWow Room.  That really rounded off the weekend of great music and fun. That night there was a spectacular full moon enveloped in clouds that gave it a dramatic effect. 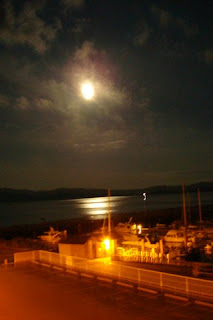 The next day (Monday) we headed back home and for a treat stopped at Molly's Reach Cafe in Gibsons Landing which used to be part of the set of the old Beachcombers TV series. 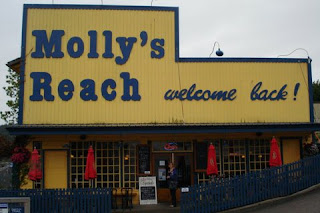 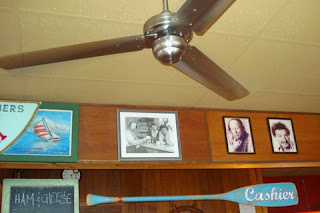 Right across from Gibsons I could see Keats Island where our family used to have a summer home.  That made for some nostalgic memories.  Then we headed on down the road to catch the Horseshoe Bay ferry back home. 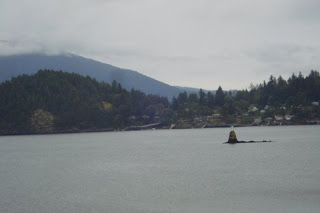 It was definitely one of the special birthday parties I'll always remember! Thanks Cheryl, Steve, Sue and all the others who made it so memorable and fun for me!