THE NIGHT WE HEARD SANTA ON THE ROOF! 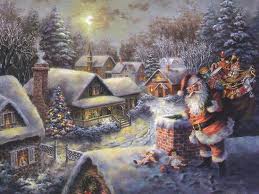 Christmas was always a very special time in our house and one of the best Christmases ever was the one when all the cousins came to stay. We were living at my grandparent's house in Stratford Ontario— Mom, my little sister Jeannie and me — when my father was overseas serving as an army chaplain in a field hospital in Holland. Every Christmas at Grandpa's was full of fun. The aunts and uncles and cousins came from various parts of Ontario and the house was full of laughter and good cheer.

That particular Christmas, because of the crowd, my cousins and I were allowed to sleep in the sun porch room. As usual, we stayed up late, played monopoly and crochinole and Chinese checkers. We had our special Christmas treat: glasses of sparkling ginger-ale (our family's 'champagne') and ate lots of the delicious goodies Mom and Grandma had backed. We sang carols, told stories and finally we were tucked into bed. 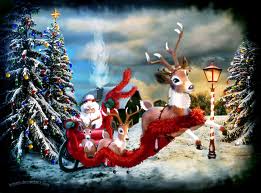 Some time after midnight I was wakened by a sound on the roof. I heard jingling bells and a loud "Hohoho!" My cousins woke up too when we heard the stomping of footsteps on the roof. Santa Claus! He was right on the sun porch roof getting ready to come down our chimney to deliver the toys. None of us dared make a sound and ducked under the covers pretending to be asleep.

Sure enough, the next morning there were lots of toys under the tree. Santa had really come! And we had heard him! I could hardly wait for school to resume after the holidays so I could tell my classmates. 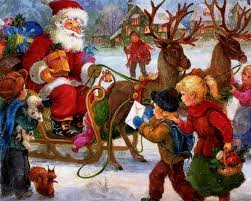 The first day back I went to school bursting with excitement. As I entered my classroom I announced, "Santa Claus came to our house. We heard him on the roof!"

"What?" scoffed one of the older boys. "Don't you know that Santa is a fake? He's just pretend. You couldn't possibly have heard him!"

I was crushed! When I went home for lunch that day I was in tears. "This boy in my class says that Santa isn't real!" I sobbed.

My mom was sympathetic but she admitted to me  that Santa really was just a myth.

"I heard him!" I insisted. "We heard him up on the roof on Christmas night!"
"That was Uncle Frank pretending to be Santa Claus," my mother explained.

For me, it was one of my biggest disappointments. I was ten years old, and my fantasy world was shattered forever. I've never forgotten it.

I always tried to keep the myth of Santa Claus alive for my own children for as long as I could. And when I worked as a daycare supervisor some years ago, we always made the Christmas celebrations special for the children.  I'd say "Let's pretend about Santa Claus," and we'd tell the time-worn Christmas fable of jolly old St. Nick and his sleigh full of toys pulled by the reindeer. I still think the Santa Claus tradition is one of the most fun parts of Christmas!